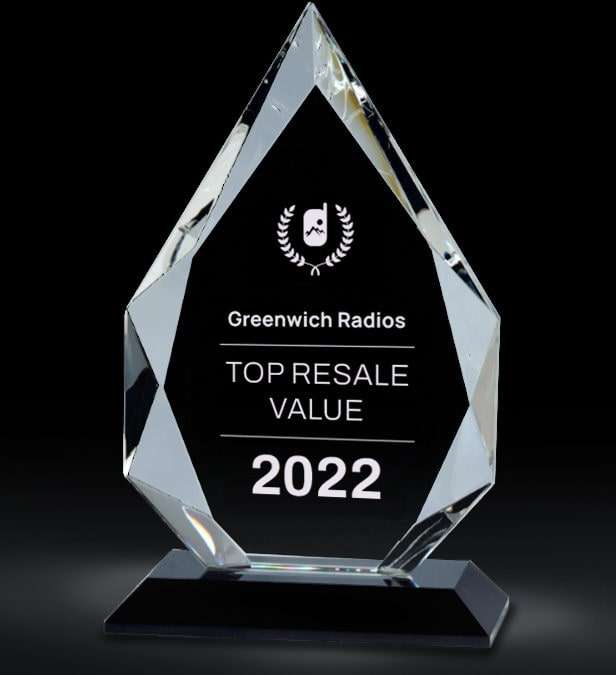 Kenwood Communications is recognized by Greenwich Radios for having the highest resale values of a land mobile two-way manufacturer. Greenwich Radios is the leading wholesaler of used radios in America.

GREENWICH, Conn., Oct. 11, 2022 /PRNewswire/ — Greenwich Radios, America’s largest wholesaler of used two-way radio equipment, awarded Kenwood Communications with the highest resale values for 2022. This inaugural award recognizes that Kenwood has the highest resale values of the major land mobile radio manufacturers in North America. Owners of Kenwood equipment should expect favorable prices if they decide to sell their equipment in the secondary used market, explains Larry Sellers, a spokesperson for Greenwich Radios: “The tailwinds in today’s market support high resale values for Kenwood equipment, especially for models in short supply on the new side.”

Data scientists found that some Kenwood products in the used marketplace were sold at prices that exceeded new. This was especially true for products which were recently discontinued by Kenwood but are still sought by end users and radio dealers. While Kenwood won the first-ever highest resale value award for a two-way manufacturer, Larry Sellers explains this might change next year as new-radio supply improves.

According to Sellers, there were three primary reasons for Kenwood’s 2022 resale leadership:

As far as Kenwood’s competitors, Larry Sellers explained that Motorola remains the most in-demand brand for two-way radios. However, Motorola’s diverse product line includes expensive options on its top-of-the-line models which are not recovered in the used market. These options might be necessary for the radios’ first owners but recouping their value in the used marketplace is difficult as used buyers generally have basic needs. Incidentally, it’s worth nothing that on a model line basis, Motorola’s APX series is the most sought according to Greenwich. Scientists also analyzed transaction data for radios manufacturers like Harris, Tait, Icom, Hytera, and others, and plan to release more industry insights in the future.

Why are resale values important for two-way radio manufacturers?

While most buyers of two-way radios buy equipment for multi-year or end-of-life terms, the rise of digital technologies is forcing quicker turnover of radio equipment as technology changes. Existing radio buyers may sell their equipment to help pay the costs of technology upgrades, especially for multi-band.

Additionally, as a result of environmental laws and social pressure, corporate and government radio end users are demanding environmentally responsible means to repurpose radio equipment – rather than send them to the trash or electronics recyclers. High resale values help these organizations achieve their environmental impact goals. Greenwich Radios, with its steadfast commitment to environmental responsibility, plants one tree in America’s National Forests for each radio the company purchases.

For more information on the resale award, members of the media, financial analysts, and others, can email larry@greenwichradios.com.

Radiowell is America’s leading buyer and wholesale seller of used 2-way radios and related equipment. We are a company driven by both passion and purpose. We are passionate about bringing our clients and partners the best values on used radios, and our purpose is to turn used radio equipment into something good for the planet.

Receive complimentary data and analysis on the used-radio market.